A Place of Mine

This weekend it was the RSPB’s Big Garden Birdwatch, their 40th one to be precise, and whilst I’ve yet to take part, the work that they do is incredibly important. Over recent years bird numbers have been in decline, and whilst farmland species are those that have been hit the worst most bird species have been on the decline since the 1970’s. There are birds that have seen an increase in numbers in recent years, such as red kites, though most of these increases have been through the concerted efforts of individuals, groups, and charities.

Bees are struggling just as much, if not more than birds, at the moment and that’s a pretty huge issue for not just wildlife, but the human race as well. If we lose our bees then we’re going to have huge issues pollinating our food crops, and if our food crops aren’t pollinated then our food doesn’t grow. If our food can’t grow then we starve. And I’m not sure about you, but I like my food.

One of the biggest issue for bees and birds is the increased urbanisation caused by an ever growing population. This has caused a massive reduction in their habitats and food supplies. However, whilst humans have historically been part of the problem, they are also starting to become part of the solution. People are starting to sit up and take notice to the harm that they’re doing to the environment and are now trying to do things to help, from creating habitats, planting food sources, and even changing the way pesticides are used.

Recently I’ve been trying to make my garden a little more wildlife friendly, but so far it’s just involved me feeding the birds and keeping a general eye on them. Whilst I haven’t completed my big garden birdwatch yet I do know almost exactly the birds I have in my garden. I have somewhere between 15 and 20 house sparrows, those noisy little birds like to nest in my holly bush, I have a couple of robins though recently I’ve just seen the one cheeky little one.

There’s a handful of jackdaws, including one with strange white mottled markings, a couple of noisy starlings that are possibly some of the fledglings that I had during the summer, though during the summer I once counted about 20 at once, making light work of the mealworms I put out for them. I have two blackbirds, a male and a female, that are currently enjoying eating all the windfall still strewn about the garden. I occasionally have a little wren, that almost blends in with female house sparrows except for it’s tiny size and cocked tail.

When I put out nyjer seed I get a few goldfinches on the seed feeder, and whilst I haven’t seen them recently I’ve also had great tits and coal tits. I’ve also had the occasional woodpigeon or three, and a pair of collared doves. I’d also be remiss if, when talking about the birds in my garden, I didn’t mention my neighbour’s chickens, who take advantage of the feed the other birds knock off the feeders.

The birds in my garden are well taken care of at the moment, so now as it’s the middle of winter, I’ve turned my attention to trying to get the garden ready to encourage bees and butterflies in the summer. At the moment it’s a bit of a messy wasteland, which is kind of what happens when no one looks after it for a few years. It’s full of weeds and raspberry canes that have grown completely wild. 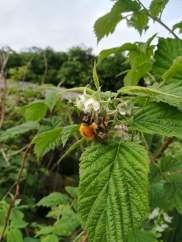 Some of this is good for bees, the amount of bees I’d see on my raspberry canes and blackberry bushes over the summer last year was incredible, and the amount of places they could nest and hide is huge. The challenge now is finding a way to make the garden both attractive and usable from a human perspective, whilst making it a haven for wildlife as well. I can already feel my mum rolling her eyes at the ambitiousness of the plan I’m undertaking.

For now I’m off to try plan what will work best with the garden I’ve currently got. Luckily a lot of the plants I have are already on a list of bee friendly species. Now it’s time to cultivate them.